Video: Here’s how OPPD gets the ‘best of the best’ 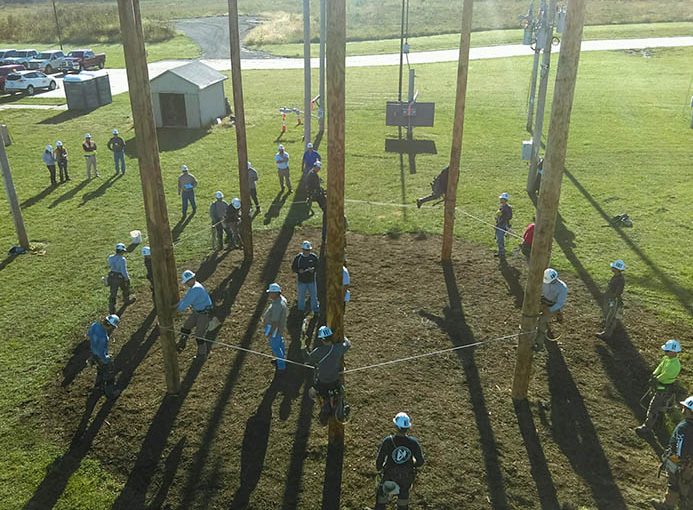 The career choice was “a blessing in disguise” for Cardenas. He worked six years a lineman for Fremont Department of Utilities before coming to OPPD and entering the apprentice program.

Reading books about line work and schooling taught Cardenas to climb and made him trainable.

“It’s one of those jobs where you have to experience it,” he said. “Nothing compares to the experience of storm work. It’s humbling and rewarding.”

Cardenas was one of 10 new apprentice line technicians hired by OPPD in November 2017. He and fellow new hire, Ben Kuhr, were chosen during OPPD’s lineman boot camp, where they competed against more than 30 other potential hires to join the utility.

Danko Pike, a 21-year veteran of OPPD, and now a working line crew leader helped select the new hires from the boot camp, also known as a pre-qualification camp. This is the third group hired through the process. Pike said it allows OPPD to hire “the best of the best.”

OPPD started the boot camp in 2011 after seeing how Westar Energy in Kansas used such a camp to hire its linemen. OPPD’s Joint Apprentice Training Committee (JATC) hosts the boot camp, evaluates the candidates and decides who to hire. Before the camp starts, the candidates apply online and go through a taped interview process. OPPD selects about 30 candidates to compete in the several-day boot camp, where they simulate storm-related outage restoration, among other skilled work.

“We’ve hired great people through this process,” Pike said. “We want to hire an apprentice with a great attitude who will be easy to work with.”

Tim Potts, field supervisor at OPPD’s Elkhorn Service Center, oversees the troubleshooters. He said the group of new hires will transfer to different areas of the company now that they are in their six month of work. This familiarizes the new line techs to different areas of OPPD’s system and gets them working with different crews.

Along with the daily work with their crew, the apprentices also go through schooling and a series of tests to graduate to the rank of journeyman, a process that takes four years.

Safety training plays a big part in their apprenticeship. OPPD has a reputation for safety, something that several of the new apprentices said drew them to the utility.

Ernie Ross, senior safety technology specialist, said they work through testing and modules to help learn their roles and duties.

“We’re building the safety mindset and culture to build that foundation so they are successful and safe for the next 30 years of their career at OPPD,” Ross said.

Potts himself a lineman understands that it is more than a job.

“Line work is a brotherhood,” Potts said. “Line work is teamwork. Our linemen go out when everyone is going in their houses. You’re working together as a team to provide a product that people need, and there is a lot of pride in turning on people’s lights.”

That’s something that drew Kuhr to the profession. He graduated last May from Northeast Community College in Norfolk and worked at Loup Power District for a few months before coming to OPPD.

He grew up working on farms around his hometown of Leigh, Neb., and thought line work looked like a good option for someone who liked working outdoors.

“We’re the guys who go out on storms when everything goes bad, and I take a lot of pride in being known as someone who will work outside and do when customers are in need,” Kuhr said.

For Kuhr, Cardenas, and OPPD’s eight other apprentice line techs, they’ll keep the lights on and do it with pride. Just like the rest of OPPD’s more than 200 other lineworkers.