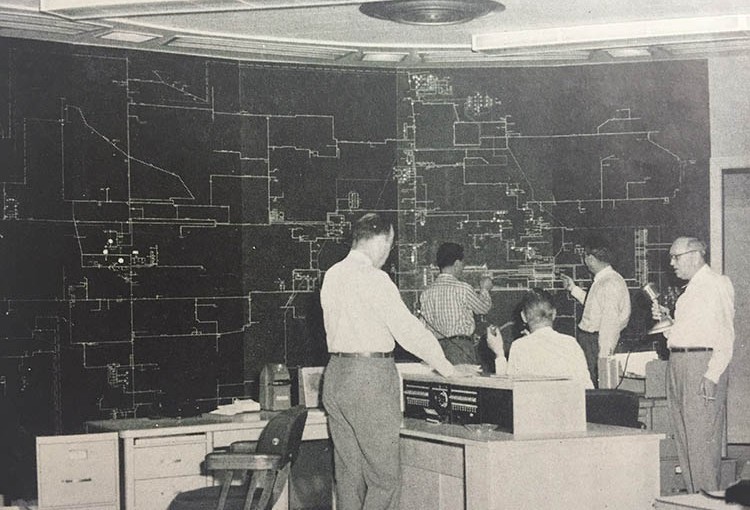 The days of a wall-size “blackboard” may be over, but the importance of OPPD’s dispatch center hasn’t changed.

In 1956, the operation was known as the Line Dispatchers department. Their facilities included the aforementioned wall, which displayed all transmission lines in the system, telephones, microphones and log books. Now, the operation is referred to as the Energy Control Center, and instead of wall boards and ladders, the facility is filled with sophisticated computer equipment and network technology.

Despite advancements in technology, personnel in 1956 were responsible for the same things done by current employees – controlling the flow of power along OPPD’s thousands of miles of electrical line. They also dispatched crews and personnel to outages.

According to an article from OPPD’s employee magazine, Flash, in 1956, eight employees staffed the facility day and night, every day of the year. Instead of logging in to a computer system as ECC personnel do now, those employees first checked the “log book” upon arrival. The book could quickly tell a dispatcher exactly what had happened so far that day, including circuit changes and outages.

Even though it lacked technology, the Line Dispatchers department successfully handled the delicate – and dangerous – task of shutting off circuits and switching over lines while maintaining power for thousands of customers.

Below are some photos of the dispatch center as it appeared in 1956 as well as a photo of how it appears now.