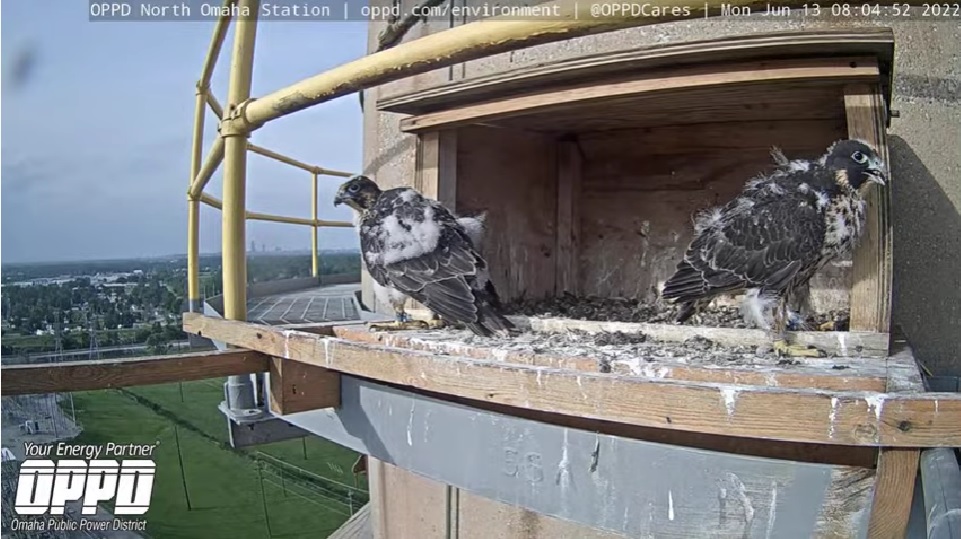 The two peregrine falcons hatched at OPPD’s North Omaha Station this spring are growing up quickly.

They’re also getting more bold and brave about exploring their surroundings. They are venturing out for strolls outside their nest box, often with a parent nearby keeping an eye on them.

And the youngsters are shedding their downy “fluff,” exposing their adult feathers. They are spreading and flapping their wings, and they should begin taking flight soon.

The sisters were banded over Memorial Day weekend, and now they have names. OPPD’s naming contest drew 1,475 votes.

The winning names? Thunder and Lightning.

Their names will be added to the falcon registry alongside the identification information included on their bands.

Peregrine falcon enthusiasts can track the birds’ activities should they show up on a webcam in the future. Lightning’s auxiliary band is A65 and Thunder’s is A66.

That’s how Lewis and Clark were first identified. The pair was born at the Nebraska State Capitol in Lincoln.

Those watching the falcons’ webcam and an area Facebook page have been witnessing plenty of antics from the pair. The sassy siblings sometimes fight over food, snatching it away from their parents or from each other and hustling to a back corner of the box to eat, blocking each other’s access. Clark eventually steps in to make sure both her chicks get enough to eat.

Observers believe Clark took up permanent residence at the OPPD box in the fall of 2015, eventually settling down with a mate to hatch two chicks. As her name suggests, she was believed to be male when she was banded in Lincoln with her brother (and current mate), Lewis.

The latest young falcons will master their flying and hunting skills in the weeks to come. Eventually, they will leave the box that has been their home since early May.

Lewis and Clark will leave the box, as well, and will head south to warmer climates as fall and winter approach. But next spring, hopefully the pair will return to the OPPD box and continue to add to their family.