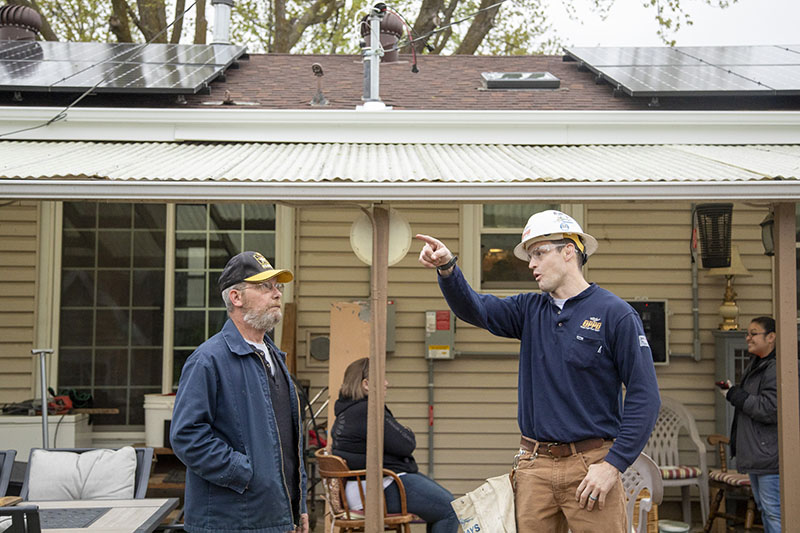 The Wire’s top stories for 2022 include progress on major projects, profiles of employees at work and at play, and a look at some rare, feathered friends.

And as always, The Wire continued to highlight traditional utility topics, as well.

Here are the top 10 stories on The Wire for 2022, according to page views.

10. Will the wacky winter weather continue? Last winter’s weather was a roller coaster affair, featuring bitter cold, wind storms and even tornadoes in December. Given the way the winter started, Nebraskans were rightly a bit concerned about how it might end. This story took a look at the forecast for the second half of winter. As we know now, by mid-January, the wackiest of the weather was behind us.

9. New substation in Bennington. OPPD is always working to anticipate and provide for the future needs of the communities it serves. One example is the work going on at the construction site of a new substation in the fast-growing Bennington area. The substation, near Bennington Road and North 144th Plaza, is expected to begin operating in mid-2024.

8. Ospreys at Fort Calhoun Station. Two ospreys returned to Fort Calhoun Station last year and made themselves at home in a refurbished nest. For the first time, the birds – the only known nesting pair in eastern Nebraska – had their own webcam, allowing thousands of viewers in the U.S. and beyond to watch them settle in and raise three chicks.

7. Longtime lineman is ready for Act 2. For 28 years, Ray Knott worked as a lineman. The job is physically demanding and often includes working unusual hours in extreme weather conditions. In 2022, he switched gears and became an area field supervisor, a job that will cause less worry for Knott’s wife but let Knott stay active. “I couldn’t sit at a desk eight hours a day, so I’m glad to get out of the office and get out and about,” he said.

6.  His pumpkin ride set a world record. Duane Hansen, a yard equipment operator at OPPD’s Nebraska City Station, floated his way to a Guinness World Record in an 864-pound pumpkin. His August trip down the Missouri River was 38 miles long, easily eclipsing the previous record of 25.5 miles. “I’d been thinking about this for years, and I didn’t think it would be really that hard to do,” Hansen said. “It was way harder than I expected.”

5.  Lineworker Appreciation Day. At OPPD, about 200 employees work as lineworkers or in related roles. And a number of former lineworkers now work as managers, supervisors or in other roles. Lineworkers are part of a tight and proud group of employees who do one of the most dangerous jobs out there, and they do it under the most extreme conditions – blazing heat, pouring rain and frigid winter storms. Last year, among the lineworkers honored on Lineworker Appreciation Day was Bruce Hamel, who retired after nearly 35 years on the lines.

4. Tackling a massive move. Last spring in the middle of a cold night, OPPD workers and contractors were hard at work. Over an eight-hour stretch, they moved an autotransformer from the Elkhorn Service Center to a substation in northwest Omaha. The move, which took months to plan and which you can watch on The Wire, required a heavy-haul trailer with 40 axles to distribute the weight. The combined weight of the autotransformer and the trailer used to move it totaled more than 1 million pounds.

3. OPPD is a family tradition for these triplets. Eric, Dan and Matt Tesarek are continuing a legacy that began with their father, John Tesarek, an engineer who spent most of his 34 year career as a supervisor at OPPD’s now-shuttered Fort Calhoun Station. Dan was the first to join the utility, in 2014, followed by Eric in 2019 and Matt in May. “It makes me feel like I must have done something right,” their father said.

2. Engines’ arrival marks Power with Purpose milestone. Progress on OPPD’s Power With Purpose project continued last year when the engines that will serve Standing Bear Lake Station began arriving at the site. Their arrival marked a major step forward with the construction of two new natural gas generation balancing plants. The plants will provide backup power for the solar component of OPPD’s Power with Purpose initiative, the utility’s solar and natural gas project.

1. Interest in residential solar power takes off. In 2021, OPPD revamped and streamlined the process of applying for Customer-Owned Generation. The program’s webpage includes OPPD’s solar calculator, which helps customers determine whether solar is right for them. The number of customers interested in putting solar power to work at home took off, climbing from 59 applications in 2020 to 600 in 2021, then hitting 1,000 in 2022.

Forecasters expect above average precipitation in February and March, but not enough to ease the area's drought conditions.